Identical twins Brittany and Briana Deane shouted "Yes" as identical twins Josh and Jeremy Salyers popped the question at Twin Lakes State Park in Virginia on February 2 (2/2/18). The simultaneous surprise marriage proposals — complete with "twinfinity" rings for both brides-to-be — were featured on the Valentine's Day installment of Inside Edition. 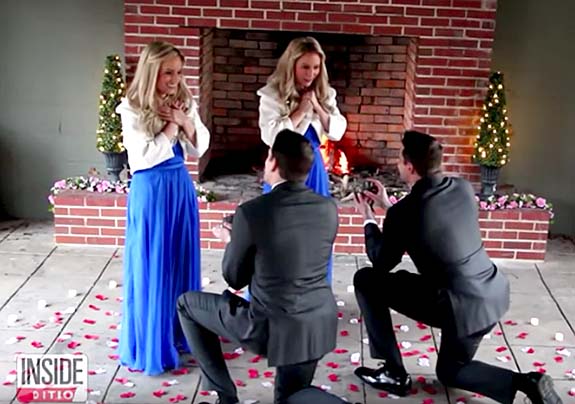 The gals from Virginia and the guys from Tennessee had met last August at The Twins Days Festival in Twinsburg, Ohio. The 31-year-old Deane twins and the 34-year-old Salyers twins admit that it was love at first sight.

"It was one of the most magical moments," Briana told DelawareOnline.com. "For me, it went in slow motion, like a movie. We all believe in soulmates and we all felt that instant connection." 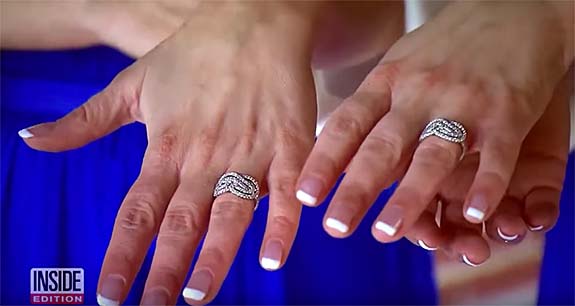 When they got home from the festival, the girls had a message waiting for them. The boys said they couldn’t wait to see them again and the girls responded, “Why wait until next year?” That next weekend, Josh and Jeremy drove from Tennessee to Virginia to see the girls.

"The rest," the girls wrote on HowHeAsked.com, "is (a double) history."

"Ever since we were little girls, we have always known that there were identical twin boys who were going to marry us one day," Briana said.

As part of the surprise proposal, the Salyers brothers convinced the Deane sisters that all four were hired to participate in a commercial for the catering facility at Twin Lakes State Park (This was also the site of their first date). The ruse was that the venue wanted to use twins as a fun tie-in to the park's name. Actually, the film crew was from the staff of Inside Edition. Josh and Jeremy had orchestrated the whole thing. 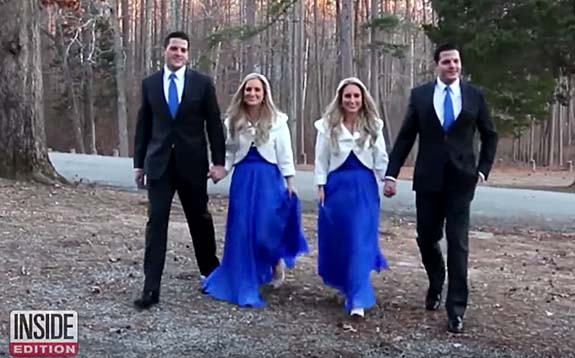 With the boys decked out in matching suits with blue ties and the girls wearing matching blue gowns, the film crew led them to a picturesque pavilion decorated with rose petals and candles. When the producer yelled, "Action," Josh and Jeremy dropped to one knee, pulled out their matching "double infinity" diamond rings and asked their girlfriends to marry them. Brittany and Briana simultaneously said, "Yes."

The couples are planning a dual wedding ceremony during The Twins Days Festival in Twinsburg this August. After the wedding, the foursome will be sharing a home.